Call for Nominations for the Murray Kaufman Natural Man Award

Every year during the Fall / Winter Board meeting, the Board of Directors take nominations of possible candidates for the Murray Kaufman Natural Man Award and votes for the individual that best fulfills the requirements for receiving the award. Nominations are suggested by board members only, but this year, we are desiring to change the nomination process up quite a bit. Rather than relying solely on board members who may or may not know of men who might be deserving of the award, we are asking for *your* help in nominating potential recipients. 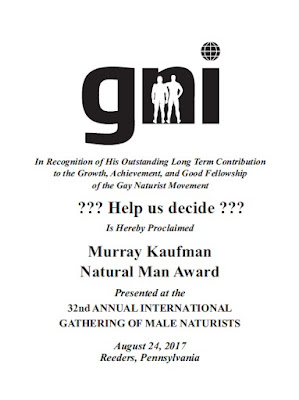 The annual award is given for one’s “recognition of his outstanding long term contribution to the growth, achievement, and good fellowship of the gay naturist movement.”  Recipients do not have to be members of GNI, nor are they required to attend a Gathering, so keep that in mind if you have any thoughts on whom might be this years’ winner. We’ve have awarded this award to non-GNI members and to men who do not identify as gay, but who’ve still met the award requirements.

If you believe that you know someone who best fulfills the requirements, send an e-mail to the GNI Business Office with the following:

·         Name of your nominee.
·         Reason for why you are nominating him – what has he done to contribute to the growth, achievement, and fellowship of naturism?
·         Any additional details of why your nominee should be considered.

Please submit your e-mail before April 1, 2017 and the board will vote on all submissions after the deadline. Don’t tell your nominee that you’ve suggested he win the award – it’s a surprise! The award winner will be announced at The Gathering on Thursday, August 24, 2017 during the intermission of the Mr. GNI contest. Put some thought to this and let us know by the deadline, and we hope to see you at The Gathering – August 18 – 27, 2017!

Posted by GNI Communications at 7:00 PM

Movie Nights at The Gathering


It's happened to all of us at Camp: there's a lecture on the films of Jeanette MacDonald at the same time as a group of guys are getting together for some fun "across the lake" while the Drag Races are just starting. I know you don't always believe us, but we work very hard as we schedule dozens of events. Sometimes (often!) simultaneous events can't be avoided.

What you may not know is that during evening shows in the Auditorium, movies are shown nearby in the Left Dining Hall. If you're looking for some variety in your evening entertainment, stop on over. And bring a pad and some popcorn.

I've tried some interesting themes over the last 7 or 8 years, but for the last three years have been showing newer releases to good success. Each movie usually has a theme relevant to gay men, and if there is nudity involved, all the better. Sometimes there are musicals, oftentimes a foreign-language entry or two, occasionally a hilarious gay romp. But most features are dramas or mysteries culled from the recently burgeoning gay film industry.

I am previewing films all year, looking for titles that will interest as many guys as possible. Two years ago, I showed the amazing Stranger By the Lake, which inspired me to show the profound Tom At the Farm the next year. One night for the last several years has been devoted to the silly, on-line series Where the Bears Are.

This year may include the Korean entry Spa Night. I really loved Closet Monster because I strongly identified with the lead (Connor Jessup from American Crime, Season 2.) I was skeptical about Gerontophilia, but ended up loving it; and I think you will too.

I am always looking for suggestions. Email me here with ideas for specific movies or even themes. Imagine beyond you're own favorites and bring me titles that you think would interest the widest group of men who love movies.
Posted by GNI Communications at 6:57 PM