Lady Bunny Scheduled to Perform at the Gathering 2017

GNI is excited to announce that Lady Bunny will be headlining for the men of GNI during the 2017 GNI Annual Gathering in August! Earlier this year on the GNI Facebook page, a suggestion came from an attendee that we should consider inviting Lady Bunny to perform or DJ for us. GNI takes suggestions seriously so we reached out to Lady Bunny's agent to see if she was available to perform. It didn't take long before we had a solid yes from Lady Bunny; we worked out the details, got a contract signed, and here we are ... now letting you know that Lady Bunny will be joining us. We know this will be a fantastic show! There is still time to register - August 18 - 27, 2017! 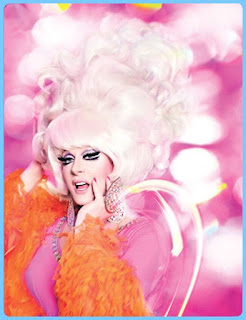 "There have been recent brushes with the art world as well. Most recently, Bunny DJ'ed for a three-day exhibit at Faena Gallery in Buenos Aires for a disco-themed art installation by assume vivid astro focus. And Bunny performed original music and conducted a heart-felt interview with pioneer video artist Charles Atlas called The Waning Of Justice at the Luhring Augustine Gallery. (Charlie’s other documentary subjects include Leigh Bowery, Antony and Merce Cunningham.) And Bunny was delighted to be picked as one of home decor guru Jonathan Adler’s muses for his original Inspiration Points series after Jonathan designed a pitcher modeled after Bunny.

In the last three years, Bunny has created two one-'woman' shows at La Escuelita. Both That Ain’t No Lady! and Clown’s Syndrome were extended for months after sell-out crowds and a rave review from the NY Times’ Charles Rooney which stated: “Most of Lady Bunny’s best lines are unprintable here, but more than any performer I saw this year 'the old pig in a wig,' as she calls herself, made me weep with laughter, often while groaning with disgust. And isn’t that what the best low comedy is all about?” Clowns Syndrome earned this glowing review from Irish Central: “A downtown drag fixture for over two and a half decades, in her new show Clowns Syndrome the self-professed 'pig in a wig' has crafted the funniest, most engagingly thoughtful and by far the most entertaining drag show I have ever seen.” Michael Musto called it “the funniest show in town.” Both shows toured the globe from LA to Palm Springs to San Francisco to Fort Lauderdale to Provincetown to London to Puerta Vallarta and four cities in Australia. Her current touring show, entitled Trans-Jester just had a successful run at London's Soho Theater and has received rave reviews in the New York Times, OUT and Huffington Post."

"Talented, glamorous and funny as hell, Lady Bunny is a glittering comet hurtling toward Planet Show Biz. Brace yourself for impact!"

Posted by GNI Communications at 7:16 PM 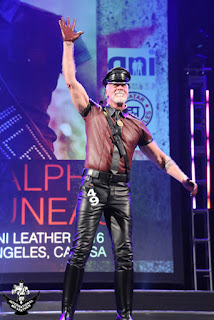 On behalf of GNI members around the world, congratulations to Ralph Bruneau, Mr GNI Leather 2016, on being selected International Mr Leather 2017 in Chicago this past weekend! This is a huge win for all naturists, for Ralph and for GNI; we are thrilled to have Ralph represent GNI in the international leather community for the next year!! And a special thanks to those of you who made this happen, who supported Ralph, and stood by him every step of the way. It truly is a win for everyone; Ralph will make a fantastic representative and we are proud to have him represent his naked brothers.

Also check out Ralph's post about his experiences at the GNI Gathering 2016 in our blog post here.
Posted by GNI Communications at 7:25 PM


Back in 1975, South Australia became the first state in Australia to legalise nudity at Australia’s best known nude beach, Maslin Beach. Since then a small number of nude groups have established themselves, however they are primarily focused towards heterosexual nudists.

It was the lack of options for gay men that brought a few like-minded friends together at a nude gathering and the idea of starting a gay nude group for those in the Adelaide area was formed.

In 2015, the Nude Guys Club (NGC) was brought to life with the first ‘clothed’ social get together in a local pub to discuss and plan the new clubs future.

It was a few months later when we were approached by a local gay night club, The Mars Bar, to see if we were looking for a permanent venue to hold our nude events.

We took them up on their offer and began holding monthly nude nights with different themed events. After a while these proved to be so popular that we started to hold events twice a month instead.
Some of our events have included after work drinks, Sunday barbeques, UV paint parties, and our very popular Starkers night, which is underwear optional for the first few hours for those guys who are a little shy to go ‘full pickle’ right from the start.

Other than our regular nights in the city, we’ve also have some get togethers at our local nude beach through the summer, nude night hikes in the Adelaide Hills and the guys are always having private nude house parties and dinners.

Adelaide is a reasonably small city, certainly smaller than Australia’s larger cities of Sydney and Melbourne, but we still have around 500 guys from all over the country on the mailing list and generally at our events we have around 40 to 50 guys come along to nude up and meet new friends. Most times we have new guys coming along and taking that first step to experience our nude lifestyle and socialising with the guys over a few drinks and dance in a safe nightclub environment.

With more guys coming along, new ideas are formed and we introduce other gay groups to join us. The Adelaide Leathermen join us a few times a year for a Nude and Leather night which is a mix of guys decked out in leather outfits all the way to guys being completely nude. Soon we’ll be working with local drag queens and having a Nude Drag night where guys can come along in drag makeup and hair but also be completely nude as well! 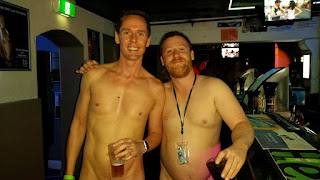 Organising NGC events and giving guys the opportunity to be nude in our community is such a rewarding experience for us, the guys are always grateful and wanting to help out. Listening to their stories and hearing about their backgrounds makes you realise that we’re all the same underneath, and there is no need to be judgmental about how people look or to be nervous about being nude – everyone should try it!

Looking to the future we will continue to provide a safe place for guys to nude up and hope that anyone travelling to Adelaide will join us to experience what our nude club has to offer.


If you would like to see what events we have coming up, please check out our website .
Posted by GNI Communications at 6:49 PM