On July 23rd, 2016, Brian (my partner) and I took part in Belleville, Ontario pride celebrations where we set up a booth to promote GNI. Belleville is a small town in eastern Ontario. The event was very well attended in thanks to a well-run Pride Committee and progressive community leaders. The weather was picture perfect. It was a very festive day with a colourful and loud parade and a "village fair" with several vendors and various organizations. Many people showed interest in our GNI booth. This was a great opportunity to introduce people to GNI and the Gathering.  While we would have loved to have been naked at the event, Brian and I decided that public nudity would have been a bit much for a small town like Belleville.

We did, however, have GNI Gathering promotional postcards to hand out, a large GNI poster to proudly display, a GNI promotional video on my laptop, and a GNI information binder I put together including a past newsletter, information on the Gathering and GNI, and printed Gathering registration forms. Our table was adorned with the 30th Anniversary GNI towels. Brian and I put on our Canadian charm and talked up GNI and the Gathering event to the many people who keenly stopped by our display. 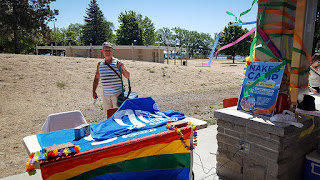 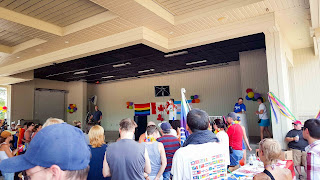 Posted by GNI Communications at 6:50 PM