Through the Looking Glass

If you’ve been around GNI long enough, you may remember the days when we published a quarterly newsletter known as The GNI Informer. GNI started publishing a newsletter for its members many, many years ago; the first known version of our newsletter was a small publication called The GNI Quarterly in the early 90’s. The fledgling publication didn’t formally become The GNI Informer until Spring of 1995. I had the pleasure of digitizing back issues of The GNI Quarterly from 1992 (the oldest edition we could find) to 2000 and converting them to a digital format that can be read on a computer or mobile device. These back issues, which we thought were long gone and unavailable, were provided by long-time member and previous board member, Steve Ericson. Steve sent me his stash of newsletters knowing that his contribution would benefit all members and for that, we are sincerely grateful. This was a huge project to undertake as each issue had to be scanned, files imported into our software to create digital publications, digital files uploaded to the GNI server, and the Member Directory pages updated to include links to the various issues. This process repeated itself over 30 times and took almost a month to complete.

A step back in time

What was really amazing for me was to go through each issue page by page and to read the important news of the day. These back issues are rich with GNI history and frames the foundation of many of the policies that we continue to observe today. From deciding sexual policy issues, ruminating about first-time naked experiences, to the announcements of the loss of our GNI brothers at a time when antiretroviral drugs were not readily available, The GNI Quarterly and GNI Informer back issues provide a fascinating tale of our history. It truly is a must-read for everyone who wants to know more about the organization. You’ll see ads for businesses that supported naturism; many are no longer around. You’ll read about stories of legislation in the 90’s that threatened our sacred nude beaches and naked swimming holes and thanks to the hard work of The Naturist Action Committee, we continue to enjoy many of those same places today. You’ll peruse the issues and recognize the faces of men still around today but were 25 years younger. You’ll read about the struggles that GNI faced, the adversity and challenges we overcame, and recognize the deep and unwavering commitment by any number of men and volunteers who served the organization to make it what it is today.

One of the most eye-opening revelations for me personally was when I came across an advertisement in 1997, 1998, and 1999 for Gay Naturists Australia (no affiliation to GNI). This was an event organized by a group in Australia that hosted an event similar to The GNI Gathering. And it was held at Turtle Cove in Cairns, Queensland – the same place where we are holding GNI Australia, February 21 – 28, 2019! I’m including a screen shot of the ad found in the Spring 1999 issue of The Informer. While I was at Turtle Cove in 2016, I heard about GNA from other men who were at the resort. They gave me a brief history of GNA and hoped that GNI would help resurrect an event that was lost when the event got too large and needed more people to help organize it. GNI is recognized as a leader in naturism and event planning and with the board’s approval in 2016, GNI started to plan for GNI Australia 2019. We have some really fantastic things planned so if anyone is still interested in coming, don’t hesitate to sign up now. 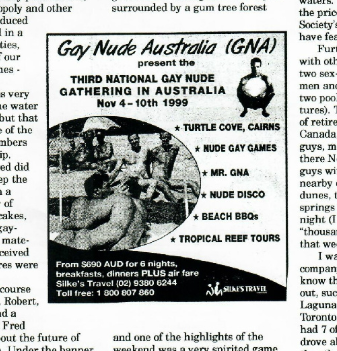 Do yourself a favor. When you have a few minutes, log on to the Member Directory and click on “The Gay Naturist Informer” navigation link. You’ll find “The GNI Informer” 1990-1999 and 2000-2013 issues when the last GNI Informer publication was published. I encourage you to read all of the issues at some point, but for those who really want to gaze through the looking glass of time, spend some time in the 1990-1999 section.

Enjoy the read. I did!
Posted by GNI Communications at 6:49 PM