Stormy Weather made her first appearance on the GNI stage in 1999 when she performed in what was then known as the Tuesday Night Talent Show. She returned in 2000 to compete for Miss GNI Lace - and although her first bid for the crown was unsuccessful (she would go on to win the next year), she was clearly starting to connect with the men of GNI.

In 2001, that connection earned her a spot as a celebrity panelist on GNI's version of Match Game and, to borrow the familiar phrase, a star was born! Before leaving the Gathering that year, Match Game producer John Positano approached Stormy about headlining a show at the 2002 Gathering.

The Tuesday Night Talent Show was renamed and Stormy was back where it all started when The Stormy Weather Variety Show premiered on Tuesday, August 20, 2002.

This year marks the 15th Anniversary of the show and after a first-year assist from John, Stormy has served as not only the show's host, but also its producer and director. Of course, the show wouldn't succeed without the combined efforts of stage manager Colin Godwin, sound engineer Preston Birchner, a hardworking crew, and most importantly, the countless men of GNI who have contributed to the show by sharing their talents year after year. 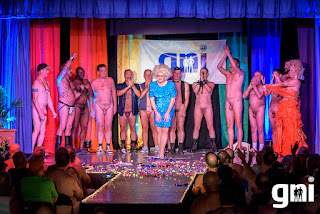 The 15th Anniversary Stormy Weather Variety Show will take place at the 2017 Gathering on Tuesday, August 22. Stormy is looking forward to continuing the tradition of introducing new talent to the stage and hoping for the opportunity to welcome back audience favorites from the past.

There will be more specifics published in the daily schedule at the Gathering, but if you'd like to be in the show, you will need to attend an audition on Monday morning and, if you are cast in the show, a rehearsal on Tuesday afternoon. Auditions will be held in the order in which you sign up. You will be able to sign up upon arrival at the Gathering, but if you'd like to get a head start, you can sign up in advance by clicking here.

Posted by GNI Communications at 7:30 PM