Post-NakedFest 2021: Second Time Around - Thoughts From a Returning Member (Part 2)

NakedFest is unfortunately over for another year. Sadly good things never last forever. But to help you process the after-camp slump, we have some NakedFest articles for you to read to help you relive the fun times experienced there. If you didn't attend, these articles will help you get energized for the hopeful return of The Gathering in 2022.

In the last edition of BuffBuzz, we had a series of articles by members who wrote about their feelings before leaving to NakedFest. The following article is by GNI member Derek Ledbetter. In the last issue, he wrote about his feelings as a returning attendee. In this article, he writes about what he ended up experiencing. So read on to get ready for a deep-dive of NakedFest through Derek's eyes.

While I sit here reviewing my journal, my main thought is GNI can be what each of us makes of it. Before I share my thoughts, let me first acknowledge an individual at camp who came up to me and stated that he read my previous article. Thanks for saying hi and reading it. 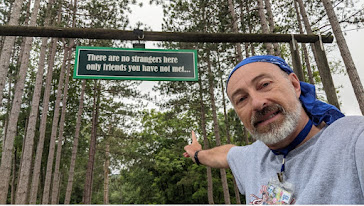 I will start by comparing the bus situation from 2016 vs. 2021. This year, being extremely surprised, was a greeter to meet everyone at the airport. He had a list of all the individuals that were arriving, and the experience was a huge improvement over my first year in 2016 where we had to wander around, call, and track down the area where I was being picked up. Kudos to GNI for working on the bus arrangement and making it a better experience.

When I arrived at camp, I was somewhat late for my first session of the "Celebrating the Body Electric" (CBE) class, which began at 5 p.m. that Friday (this was a workshop I decided to take this year). After notifying my CBE contact, it was time for supper at camp. After supper, I took off to the location where the workshop was being held, and the second part began that evening. My contact stated that I didn't miss anything, so I didn't feel that bad when the bus driver had no clue how to get to camp (which is why I arrived late). The class usually begins on Friday, normally when arrival registration is over and lasts to Sunday at 5 p.m. After two days of the class, I was super-charged with energy and excitement. Sunday was very intense and emotional for me. I don't want to spoil it for anyone. However, if interested in learning more about this experience, contact bodyelectric.org and tell them Derek mentioned it in his BuffBuzz article. For me, it was an educational and enlightening experience. I hear there are other classes for which I plan to investigate. 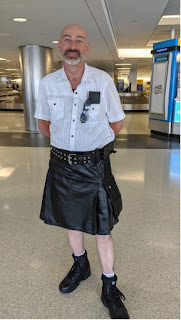 Even though I was late for the first hour of the class, I was the hospitable person as I ran across a newbie on the bus who ended up also being in my cabin. I, being the outgoing southern guy, showed him where the cabin was and provided some assistance the next few days by printing off the schedule. It was a great feeling for me to help someone new get acclimated to camp. 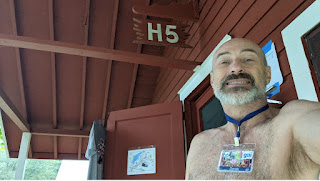 Remember in my previous article that I stated I would work out in the gym in the buff? Well, I did it and had my cabinmate take a bunch of pictures. You know the recent saying in social media, "picture or it didn't happen." :-) Additionally, I did some walking in the morning to enjoy some nude outside time. 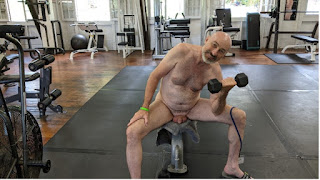 The nightly events were created for one's enjoyment. Many of those I attended either filled me with elation and/or laughter. Whether attending this year or my previous year, it is still hosted by many talented individuals.

I wanted to learn more about the BDSM world. I signed up for classes at Kink University (three of them on Sunday and three of them on Wednesday at the LeatherWerks cabin). This was illuminating as I knew even in this world, there are varying degrees of participation in the community. One special class I really enjoyed was the rope one where I was able to work on my knots (thanks Dan). The other was to learn Shibari (Thanks Andy). Shibari is a Japanese style of bondage. It's known as a kink but it's more than that. It's a kind of art. While tying the rope around someone's body, you're making different patterns and connecting with that person. The positions you have to be in while being tied aren't usually comfortable, but it's more about the journey than about the destination.

Below you'll find a selfie of me and I was not smiling. However, I wanted to show off the beautiful design of the rope harness. 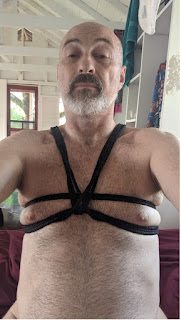 Friday, while in Kink University class, I ran into a guy and we started a conversation. I had never been in the "Dungeon" at the Pocono Eagle. This is an extra fee if one wants to have a "scene." A scene is a roleplay with another guy. After a few classes, I wanted to try it.

This guy had been a submissive (sub) for three years and wanted to learn more about being a dominant (dom). He said one can't be a good dom unless he understands the sub-part. Since I took the dom and sub classes, I was up for trying either part. We discussed a scene, and it was bondage with sensory added. It was a remarkable experience as the guy was aware of how to conduct it. At the end of the scene, I asked if he had a good time and he said he did. I know I had a good time and we know the others watching had a good time too ;) While I used to think it was just about "active and passive" roles, I now know it is so much more than that.

I'm extremely grateful for this guy who gave me my first Dungeon experience. As another person I spoke with stated, "the dom is supposed to make you want to come back for more." I can say, this dom did it correctly as I could easily come back to him and want more. :) 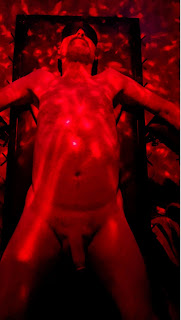 I didn't get to play volleyball. However, my schedule allowed me to take "Country Line Dance Lessons." After the lessons were over, there were two professional dance instructors who provided opportunities for dancing. Additionally, someone I met at CBE was also there and wanted to work on his two-step. Since I can two-step, I was able to instruct him on how to count it. When I danced with the professionals, I worked on my "following" which leads with the right foot. Normally I two-step with my left foot first, which is "leading."

I made additional acquaintances during the week, and many have "Facebook friend me." Moreover, there were two social hour events in which I really enjoyed wearing my costumes. One was "50 Shades of Black" and the other was "Animal Husbandry." I had other costumes. However, there are some creative people when it comes to costumes at GNI. Below are my two costumes: one was a slave and one was a tiger or might have been "Tigger the Tiger" as I do have energy. :) 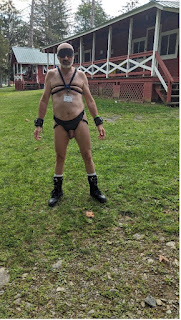 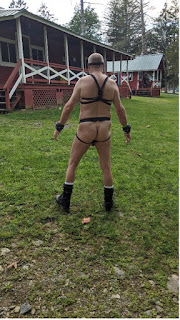 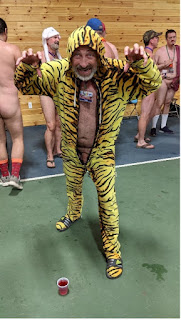 Circling back to the statement at the beginning: one makes NakedFest or The Gathering what he wants it to be. The good news, GNI camp can be what is needed for that year. I tailored my first year being social and attended some GNI sessions. This year, I added Kink University classes. Additionally, I met those who I knew from the past and met more people this year. As I evolve, my next time may be something different or may be something more of a combination.

I hope I have provided some insight as a second-timer. Even I experienced GNI camp differently than last time, as interests have changed for me. Moreover, being there more than once, getting to know more people there, I have become somewhat "family." I saw people I have seen in my past. Although I need to work on names, faces I don't forget.

Until next time I can be with my GNI family, stay safe and be well.